D&D: Lair of the Necromancer

Howdie.  My oldest daughter has been interested in playing Dungeons and Dragons.  Because it was what I gamed as a kid, and somehow I still remembered most of it, I chose to use the 1981 Basic Boxed Set to start her out with... 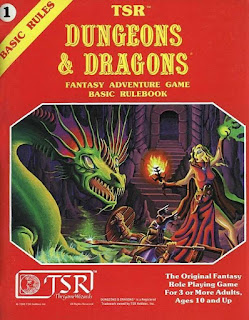 She probably will graduate onto a later version, but for now this will work just fine.  As no one else is readily available to game, I told her to make up two characters, I would run two characters also, giving her a party of 4 adventurers to rely on.  I would take no part in decisions, but would run "my" two characters intelligently.

She created a Hafling named Demetrius, and a Fighter named Romulus.  I created a Dwarf named Odae and a Magic-User named Bara.

The adventurers traveled through the village of Strossburg (note:  I am not quite sure, but its possible I might run this as a Warhammer themed environment with D&D rules, more or less).  While resting at the end, they can't help but overhear the worried villagers complaining of mysterious noises in the night, missing animals, and now even missing people.  Eager for adventure, the party decided to pursue the rumors.  They narrowed their search to the Strossburg cemetery, learning that there was once Old Strossburg (long since destroyed in a past war and empty) and New Strossburg, which survived and became simply Strossburg.  The cemetery appears to be in the midst of Old and New.  They choose to wait until the next day to investigate the cemetery, seeing no reason to do so in the dark.

The party begins their investigation, which takes them further away from Strossburg and towards he ruins of Old Strossburg.  They are suddenly beset upon by a trio of emaciated wolves that strangely attack a well armed party in midday.  There are a couple of hasty bow shots before the beasts are upon the party. 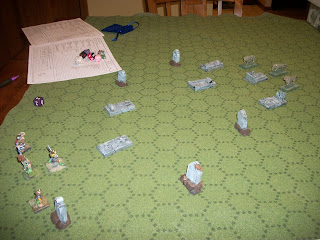 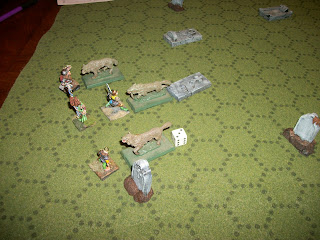 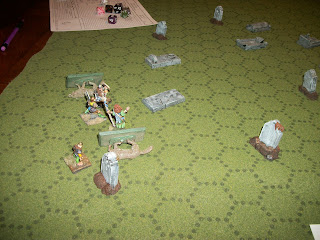 Despite a minor wound, the party quickly dispatch two wolves, and the third flees.

About this time, the party notices what appears to be a semi traveled path.  This leads to a shrub covered mound, that turns out to be a long forgotten catacombs system.  They light torches and enter.

Romulus sustains a minor injury as rotten floorstones give way in the long entrance hall.  They enter a corridor connection filled with piles of bones.  Some of these bones rise as animated skeletons that attack. 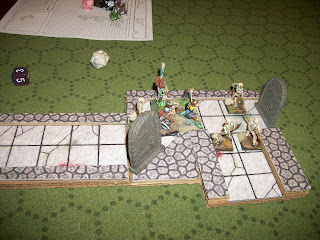 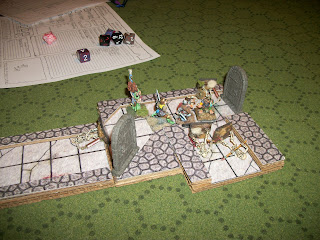 The fight here is quickly over, but not before the party takes several wounds.  Without a Cleric with healing (a first level Cleric would have had no healing anyway), the party is forced to bind their wounds for minor healing (1-2 points... this is a bit of a DM cheat, but not a terrible idea for beginners with 1st level characters).  The party locates a silver dagger amid the rubbish.

The party chooses to enter a dusty cobwebbed corridor.  They notice whitish mounds of rubble... which reveal themselves to actually be the webbed remains of rats and other small animals..... this is no ordinary bunch of cobwebs, but the hiding place for a large spider. 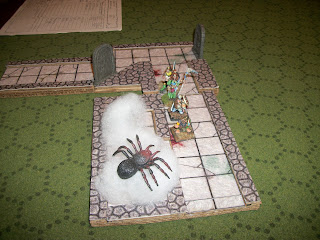 The spider itself was about the size of a small dog, with a milder venom than its larger kin. It pounces on Demetrius and delivers a swift bite.  The Halfing's roll against poison saves him from being incapacitated for a day.  He and Odae slice into the arachnid, ending its rule in this off-chamber. 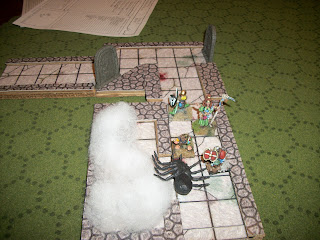 They find a few coins and some pieces of crystal jewelry.

Going back the unopened door, the party continues forward.  They find a short "tee" with three more doors.  They hear loud gnashing and rending noises mingled with growling.  Leaving that one for later, thy go to the right and open a quieter door.  They have found the lair of a foul necromancer (level 3 Cleric) attended to by a pair of armored skeletons (skeletons with an improved armor class. 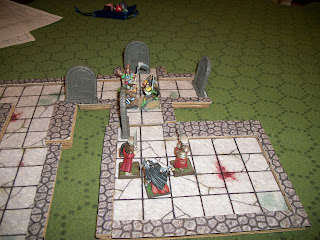 The battle is fierce. Demtrius and Odae take wounds, Bara chooses to unleash her only spell,  Magic Missile, at the necromancer, then enters melee combat (she had previously voided melee in the other encounters due to her lack of armor and low hit points.  The party emerges victorious, but by now are starting to show signs of accumulated damage.  They search the quarters, finding two Cure Light Wounds potions and a cache of gold.  Strangely, no one drinks from the potions. 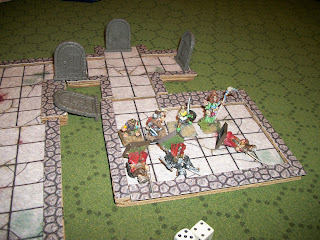 Deciding to save the noisy door for last, they open the other door, finding an unused and dusty catacomb chamber filled with bones which... thankfully... do not rise to attack.

Steeling themselves for whatever lies beyond, they barge through the final door, ready to face whatever horror has been greedily devouring flesh.... 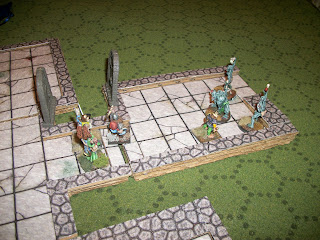 Ghouls!  They have interrupted the feast of a trio of Ghouls!  If the necromancer is to blame for the mysterious noises in the night, the Ghouls quite likely explain the disappearances, an quite obviously were in league with the now dispatched necromancer. 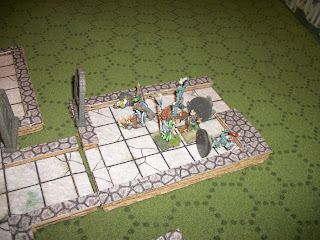 This battle proves to be very tough.  One Ghouls is quickly eliminated by a critical hit from Demetrius, and another hacked down by a combined effort... but.... first Romulus, then Odae are felled by the paralysis causing strikes of the third Ghoul.  Alone, it realizes it must keep fighting before feeding.  Bara moves into melee again to support Demetrius... 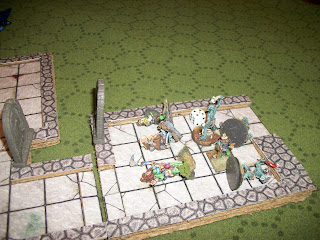 and she too is struck down with paralysis (and barely escapes being killed outright from the hit).  Demetrius is left alone to face the final Ghoul.  Too bad there were no Elves in the party....

Now, as a DM note, despite cheating with the binding to cure a couple of points of damage, I was fully prepared to allow the party to be killed by the monsters, letting my daughter re-roll new characters for another adventure if she liked.  So in this case, she would have to run Demetrius, her Halfling, to the bitter end if need be.  Also as a DM note, I thought the Cleric and armored skeletons would be the "tough" encounter (well, they were tough).... I had not counted on 3 of 4 party members being paralyzed by the Ghouls!  And they almost killed one character from their hits.

Demetrius is hit... and.... makes his save.  He strikes back on the previously wounded Ghoul... and slays it!

Unable to carry his three friends to safety, and unwilling to leave them behind, he spikes the door shut, attends to their wounds as best he can, and stands guard until they begin to recover. 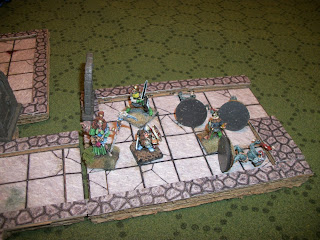 They find a mixed variety of coins, and a finely crafted dagger that is a magical weapon +1.  They return to Strossburg with their tale.  The burgomeister sends a party of villagers to the location to burn it out and seal it forever, lest it become the lair for some new horror.  The party must remain in the village for a week or two to fully recover from their wounds.

So, there it is.  A simple, short, and logically designed first time D&D adventure.  There will be more to come....