Howdie.  This will be a fairly long post, as I have plenty to talk about :)

I decided recently to indulge in a new / old interest:  modern naval wargaming.  Decades ago I played Harpoon.  While I no longer am interested in such a detailed system, modern ship to ship combat is something I wanted to revisit.  After conference with another interested party in our club, we decided to utilize 1:3000 for our ship scale and selected Shipwreck! from Vandering as a more approachable system than Harpoon, producing games that could be completed in a couple of hours.  We have not as of yet played a game, but we have only had the miniatures and rules for a couple of weeks.

We ordered from Navwar.  I am happy with the purchase, the price (even with heavy shipping) was quite reasonable, though, I can't resist saying that the ordering system will not be for everyone.

We agreed that we would be gaming in the waters of the Far East... he opted for the USN, I chose the PLAN.  What was I thinking !?!?  I have a lot to learn about the Chinese navy, but something I know already is that their ships are outclassed by their American counterparts.  I hope these will do more than serve as targets for American missiles....  the completed fleet thus far.... 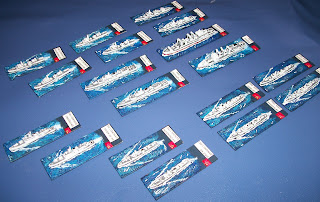 Many thanks for the images and advice I found on Of Dice and Tiny Men.  I did not use the commercial water effects paint... I used plain old water soluble caulk, carefully smeared thin on the bases, and "waved" up mostly with my fingers.  It seems to work fine... though I like the colors on the Of Dice and Tiny Men ships better than my own (I think that mine will work fine too). 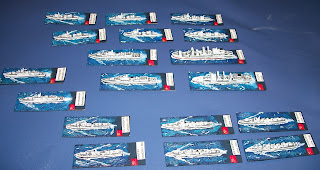 My order was centered on the grab bag style "Fleet Pack".  Wasn't sure what I would get, but I was not disappointed when it arrived.  Here is a tally of what that included (fleet packs are12 GBP plus shipping of 40%, or about $27 USD total);

Now, those last two supply ships are something that I can use, but probably would not have ordered.  Since they came with the grab bag, its basically like I got them for free (price wise, it's like I got a bunch of free packs).

I added some additional support to the fleet pack, in the form of an Admiral Kutnesov CV to represent the ex-Varyag now sailing for the PLAN as the Liaoning (can't hurt to have a carrier).  The opposing USN force is centered around a Theodore Roosevelt CVN... so I added some aircraft, a pack of MiG-23 which will work visually as J-10, a pack of Tu-16 for my Chinese H-6 copies, and a pack of Ka-27 Hormones.  Well, the helos will fill in for every helo I need.  I may look into getting a pack of F-18s, and use them as J-15s (at 1:3000 that might work, as the J-15s or Su-33s are not available). 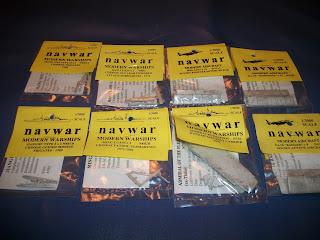 I have not painted these yet, nor the subs, or the Jianghu Ty 3 and Jiangwei Ty 1.

Speaking of painting, these are very different than anything I have painted before.  I suffered some momentary panic, before realizing I had to adjust my methods.  These are not going to win any prizes, but they look good enough for me.  Most of the pictures I have seen of PLAN vessels show them as very light grey or near white... so I went with a light grey coat, darker grey for the deck, then white paint for the hull and superstructures.  They should be "lighter" than the USN ships.

The backbone of my surface fleet are the Luhu destroyers, and the blood of my fleet is the supply ships... here they are, sailing with Jiangwei Ty Is in support....

The Luda class destroyers will serve as important ships also.  I have 4 of them, plus 2 more converted with a helo deck.  Only 1 of these (the Jinan) was actually built, but the pack came with two.  I painted one miniature as the Jinan, and "promoted" the Changsha to the same status, thinking it might be better used as a "what if" option than broken up as a wreck marker. 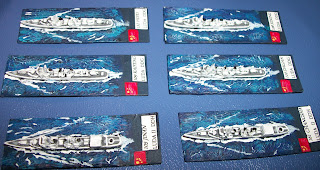 Now, where I had trouble, was with the Jianghu Ty II frigates.  I was really confused by them as they have helo hangars and decks on the aft section, instead of a gun turret.  I am not an expert on the PLAN, but my understanding is that 1 (one) ship (the Siping) was converted to a Jianghu helicopter frigate, and is usually known as a Jianghu Ty IV.  Except, in the grab bag, I have 4 of them.  Based on some conversations, and what references I can find, it seems that sometimes the helo conversion is referred to as a Ty II... if you saw that in one source, and saw in another source that there were 12 or 15 active Ty IIs in service, maybe some confusion would occur.  I could be wrong about the whole thing... but it looks like I have 3 of these too many, and no actual Ty IIs at all.  I based and painted them all, one is labeled as a Ty IV (Siping), the rest are labeled as Ty IIs.  I may field them as Ty IIs, I may try to convert them at some point, or I may turn a couple of them into wreck markers... not sure yet.  But here are some photos of the Jianghu Ty Is and "IIs" side by side.... 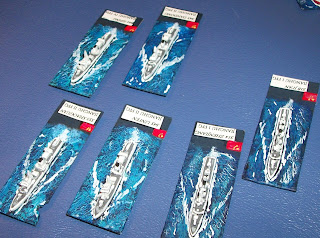 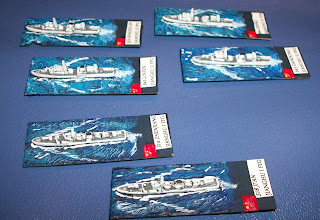 Once I have the Liaoning, subs, and the rest painted up, I will post pictures.  For now, I am trying to learn the new system, trying to learn my new fleet, and looking for a miracle to defeat the USN.  Hey, just kidding... its all about scenarios baby... I think the Chinese need to look at scenarios, not ship to ship comparisons, to find victory... plus rely on land based airpower to lend some help.  Or get someone to build an Indian fleet I can go tangle with.

Anyway, thanks for enduring this extra long post.  I happily look forward to the future of modern naval wargaming at our local club.  And the sinking of those running dog capitalist warmongers.